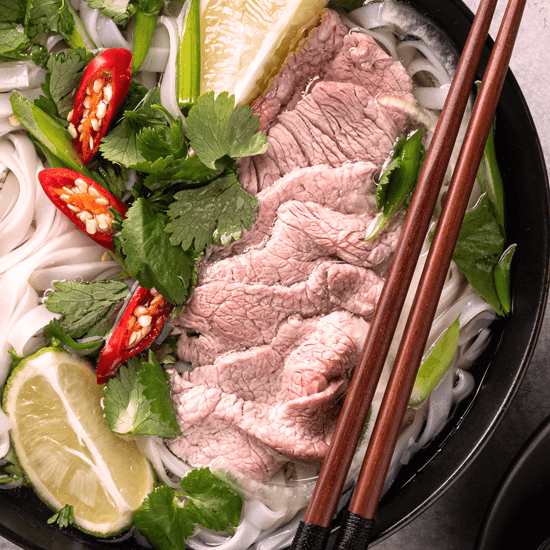 Known for its beautiful beaches, Buddhist pagodas and bustling cities – Hanoi and Ho Chi Minh City – Vietnam also offers a unique synthesis of dishes, influenced by China and the French, its former Eastern European communist sister-countries, as well as its Malaysian and Cambodian neighbours.

Here are five dishes from Vietnam that everyone should try:

Phở: Pronounced “fuh”, phở is probably the Vietnamese dish most people in the west have heard of. A savory and slightly sweet soup, phở actually refers to the rice noodles, not the soup itself, and contains a wondrous mix of meat, different kinds of basil, mint, cilantro, onions, bean sprouts, chili sauce and fish sauce. While phở lovers in North America usually slurp it for lunch or dinner, in Vietnam you’re just as likely to find it served for breakfast.

Bánh mì: Perhaps the second most well-known Vietnamese delicacy, these sandwiches are a fusion of east and west. A century ago, French colonial forces introduced crunchy French baguette bread to Indochina and the Vietnamese used them to make the most delectable creation – filled with pickled carrots, daikon, chilies, and varieties of fish cakes, meatballs, and pork.

Bánh xèo: Literally “sizzling pancake”, this savory and crispy crepe/stuffed pancake is made from rice flour, coconut milk, pork, shrimp, bean sprouts, mung bean and lots of turmeric powder. Though it looks like a western crepe or omelette, it actually contains no eggs.

Gỏi cuốn: These spring rolls are likely different from the crunchy fried variety you may have tried, and which are sometimes also referred to as spring rolls. These tasty and refreshing cigar-shaped appetizers are translucent rice paper filled with a variety of greens, herbs and meat like pork or shrimp, ready to be dipped in peanut sauce.

Cà phê: And who doesn’t like a delicious coffee to top things off? While coffee was introduced in Vietnam in 1857, fresh milk was hard to come by so the Vietnamese began using sweetened condensed milk. The result is pure deliciousness – not quite dessert but not far off! A variation is egg coffee, made with brewed coffee, egg yolk and condensed milk – it has a similar texture and taste to tiramisu.

What Vietnamese dishes have you tried and which ones do you love? Please share your thoughts with the Shop Talk blog community.

Did you know: Watch out, Brazil!

Though Vietnam was only introduced to coffee relatively recently, it’s now a major exporter of the caffeine bean. In fact, only Brazil exports more coffee, well ahead of Colombia and Ethiopia. (Source)