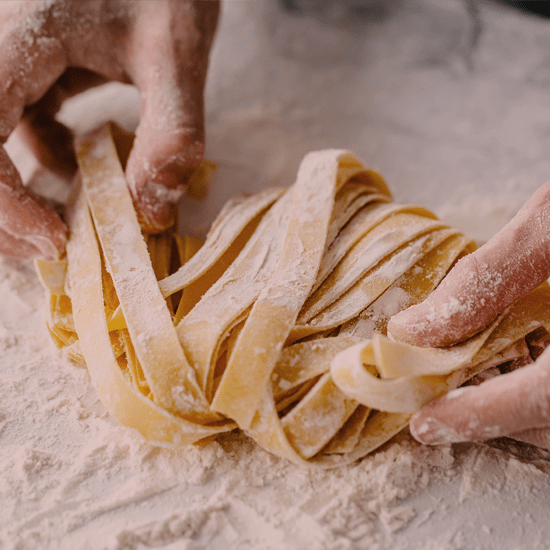 Over the last year, we've had more time on our hands, So, this month, we’re serving up pasta you can make in a snap, right in your kitchen, without any fancy gadgets. All you’ll need are flour, eggs, olive oil, salt, a knife, a rolling pin, and a little love.

·       Use a fork to lightly beat the eggs and oil, then gradually stir outward, mixing them the flour. As the dough thickens, you’ll need to use your fingers then your whole hands to mix.

·       Place the ball of dough on a floured surface and knead it for 10 minutes until it becomes smooth and elastic. If you’re finding the dough getting sticky, no problem, just sprinkle in some more flour and keep kneading. If you have a mixer with a dough hook, knead it for 7 minutes.

And presto! You’ve got pasta. Bring a pot of salted water to boil, add in your fresh noodles and cook for one to three minutes then serve with your DIY sauce.

Have you made your own pasta or have tips for the Shop Talk community? Share your pasta secrets – we always appreciate hearing from you!

Did you know? How did pasta enter the Italian diet?

Trivia buffs will tell you pasta was invented by the Chinese and introduced to Italians in the 13th century by Marco Polo. But historian John Dickie says that’s falso! According to Dickie, North Africans likely introduced itriyaa – long thin strands of dried dough that were cooked by boiling – into Sicily in the 12th century and the island became a major producer of this proto-spaghetti. By Marco Polo’s time, Italians were already in love with pasta. (Source)